The 19th century Dutch painter Barend Cornelis Koekkoek is renowned all over the world. He is the most important representative of the largest dynasty of painters ever in the Netherlands. Across four generations there were no less than sixteen artists in the Koekkoek family.

The beginning of the 19th century marked the end of a long period of political turmoil in Europe. There was a strong craving for social stability. In art this resulted in the rise of a new movement: Romanticism. Although Romanticism contained many different themes, they shared attention for emotional life and a yearning to escape reality. Romanticism arose also as a response to Classicism, which was viewed as being ‘too cold and distant’.

Barend Cornelis Koekkoek grew up at a time when Romanticism was beginning to find its way into Dutch painting, although less so than in the rest of Europe. He was taught by his father (who was also progenitor of the generations of painters in the Koekkoek family) Johannes Hermanus. Barend Cornelis quickly decided to specialise in landscape painting. Following his sixteen year older colleague Andreas Schelfhout, Koekkoek developed into the best landscape painter the Netherlands has ever had. He mastered depiction of figures, land, air, snow and ice to perfection. His technichal abilities are also illustrated by the sophisticated light and the magnificent depth effects in his paintings. He reached the peak of his career in the 1840s and the early 1850s.

Initially Koekkoek’s landscape were flat and typically Dutch. However, because of study trips to Belgium, Luxembourg and Germany the young painter got acquainted with mountainous landscapes. This resulted in a turnaround in his work. Wooded, panoramic landscapes decorated with ruins or castles became his trademark. These forest scenes with their golden sunlight, mighty oaks and streams and rivers with rocky beds often come across as foreign.

Both his Dutch winter landscapes and his forest scenes in summer were popular with a large audience, not only in the Netherlands but also far beyond. Koekkoek built a large international customer base. This included noble clients such as King Friendrich-Wilhelm IV of Prussia and Tsar Alexander II of Russia. The Dutch King Willem II owned eleven works by Koekkoek. Barend Cornelis was highly esteemed and a wealthy man, and he received many prizes, medals and honorary memberships.

In 1834 Koekkoek moved from the Netherlands to Germany. He settled in the village Kleef, just across the Dutch-German border, and would stay there for the rest of his life. The wooded area, including the ‘Reichswald’ nearby, was a great source of inspiration for Koekkoek. He had just passed the age of thirty and thanks to his success he was already able to have a manor built in Kleef. Here he founded his own art academy in 1841, that would later become very well known. This is why Koekkoek’s influence on 19th century Dutch art was great not solely because of his own works, but also because of his many students. Nowadays the ample former residence of Barend Cornelis is the Museum Haus Koekkoek.

Paintings by Barend Cornelis Koekkoek in the collection of Kunsthandel Bies: 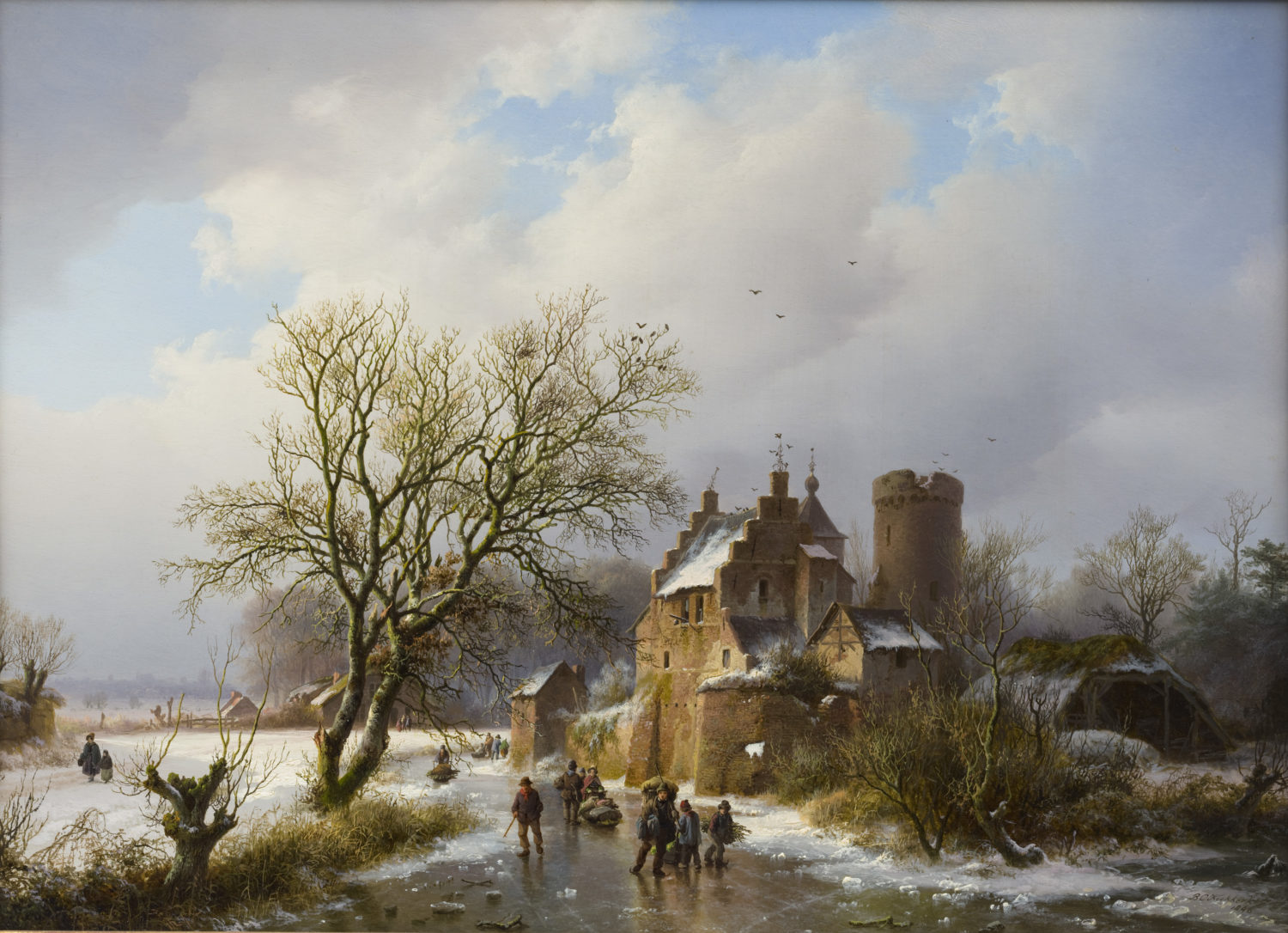 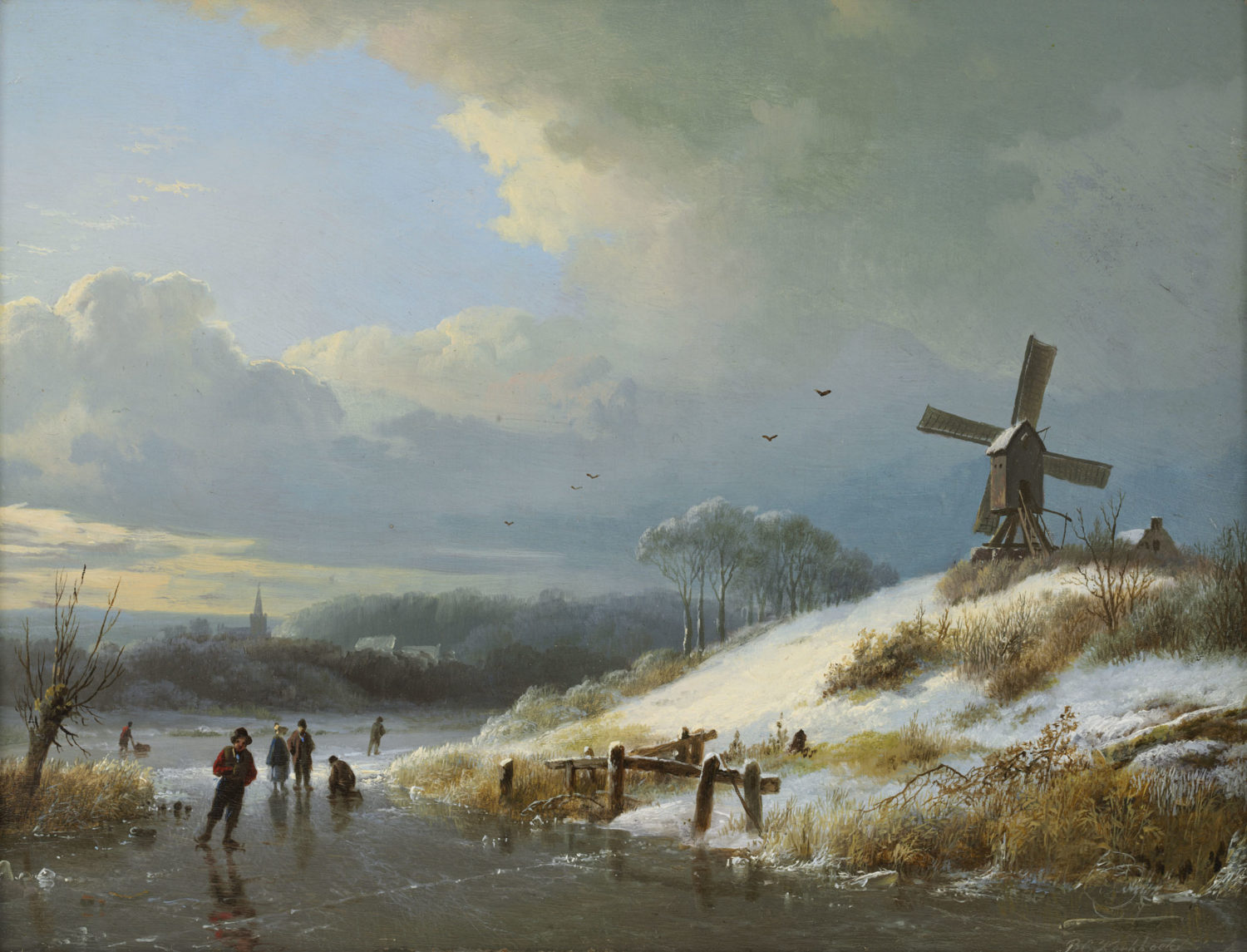 A winter landscape with figures on the ice