Like many female artists at that time, Adriana Haanen came from a real painters’ family. Her father Casparis Haanen, art dealer and painter, had four children: George Gilles, Remigius, Elisabeth Alida and Adriana (two other daughters died at a young age.) All four of them were artistically talented and became successful painters in various genres. For instance, landscape painters George and Remigius, who loved to travel, were very successful in Germany and Austria. However, nowadays, the work of Adriana, who specialised in still lifes, is valued the most on an international level.

Remarkably, little has been written about the life of Adriana Haanen. She was taught by her father and from 1841 she exhibited regularly at the Exhibitions of Living Masters in Amsterdam and The Hague, as well as in Antwerp, Brussels, Bremen and Paris. From 1845, she was an honorary member of the Royal Academy in Amsterdam, where she settled three years later in order to live and work. In 1862, at the Exhibition in Amsterdam, she received a gold medal for ‘Julÿ rozen’. Her work is represented in numerous important Dutch museums.

Haanen is often mentioned simultaneously with her bosom friend Maria Vos, whom she got to know via her brother-in-law, the painter Petrus Kiers. In 1862, Haanen moved from Amsterdam to Oosterbeek, where an artists’ colony had now emerged. Here, she shared a house with Maria Vos who had already moved to Oosterbeek in 1853. Although both artists specialised in still lifes, they were apparently strongly attracted to the rural area of the Veluwezoom. From various sources, it also seems that both Haanen and Vos had contacts with buyers and clients who had a country house in the area of Oosterbeek, including Christiaan Pieter van Eeghen, a well-known collector and philantropist. Haanen also gave drawing and painting lessons.

The national and international exhibitions and sales via the art market and direct clients must have brought Haanen considerable prosperity. She could ask high prices for her works, sometimes up to a sum of 1500 guilders. By 1870, she had earned so much money that she could afford to have a large house built in Oosterbeek, along with her friend Vos – ‘Villa Grada’, where they lived and worked together and received many artist friends.

Adriana Haanen painted finely elaborated still lifes with flowers or fruit. She composed them in a classic way in a vase or on a stone plinth. With their many hanging flowers, leaves and branches, these still lifes had an exuberant, opulent appearance. However, for a more subdued or less classic work, she placed everything in a wicker basket or loosely upon woodland soil.

Paintings by Adriana Haanen in the collection of Kunsthandel Bies: 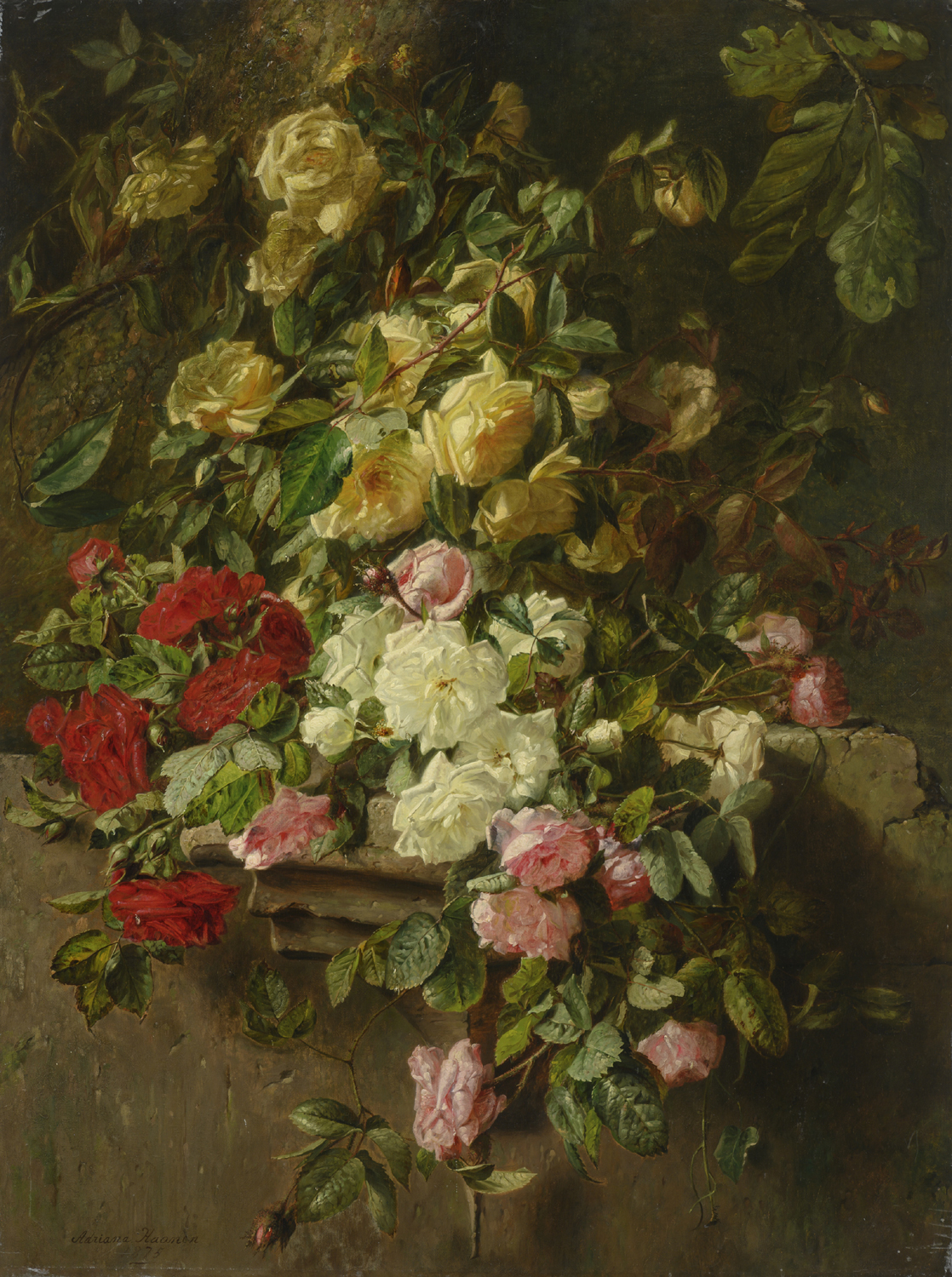 A still life with flowers on a forest floor 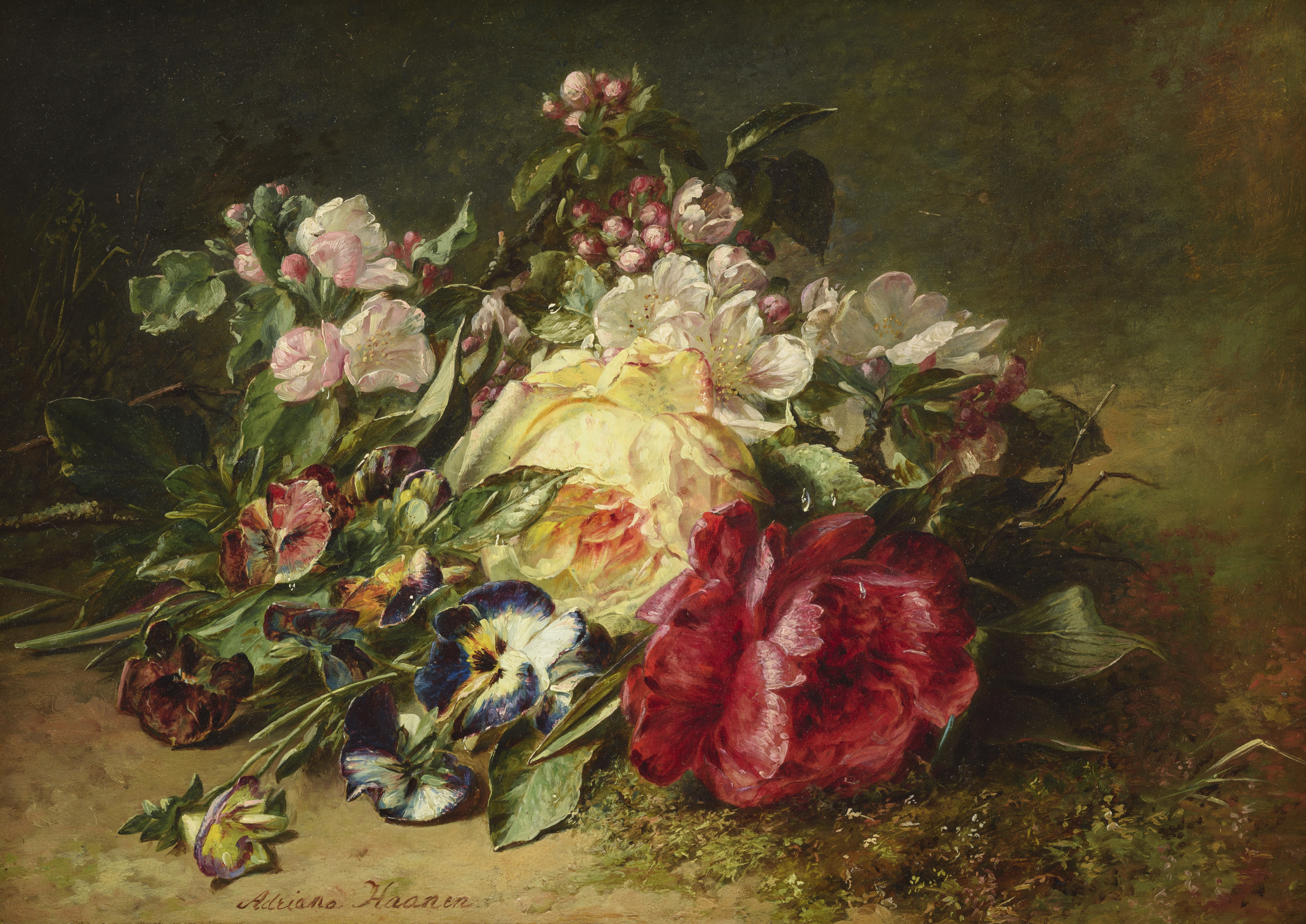 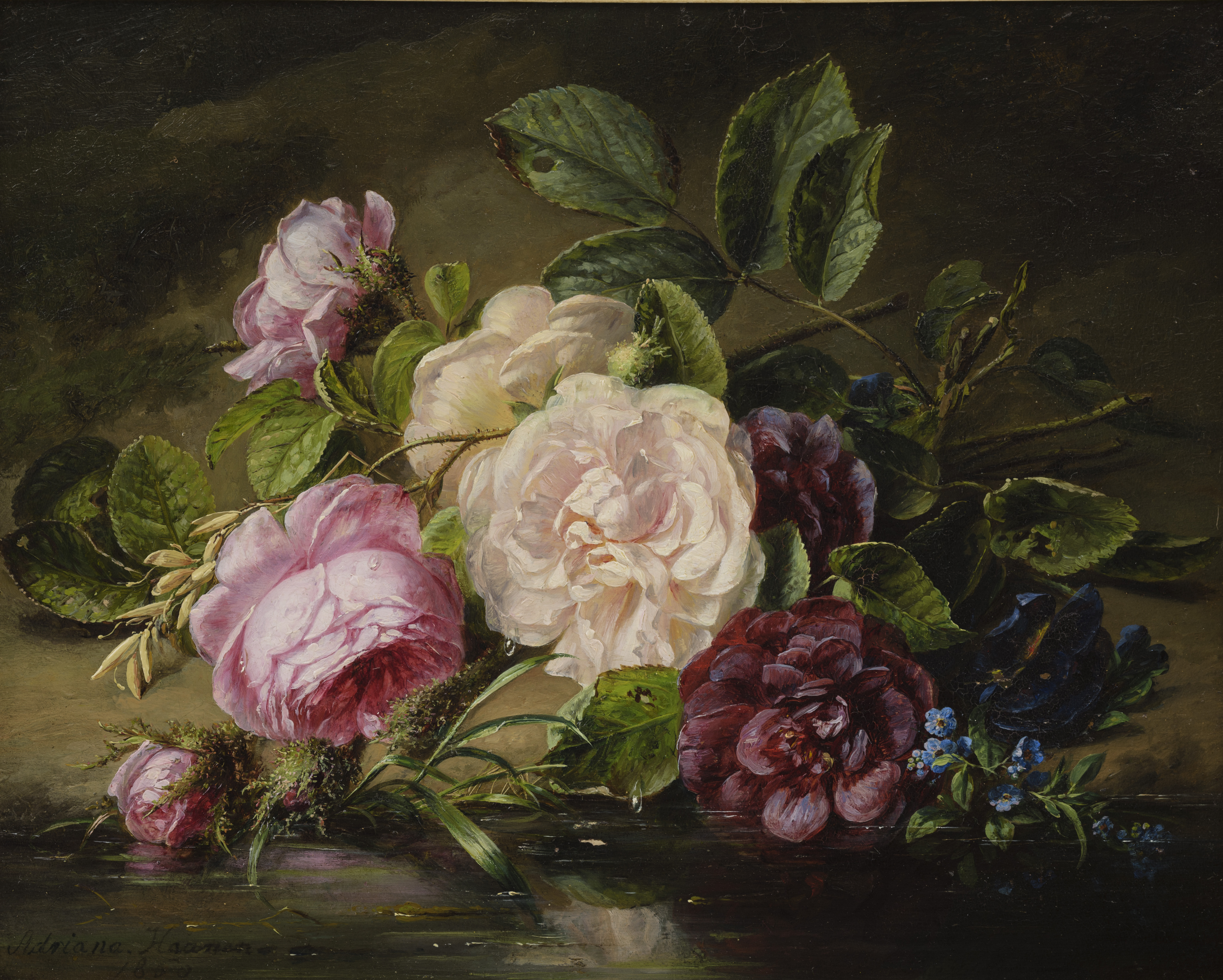 A still life of roses on a river bank 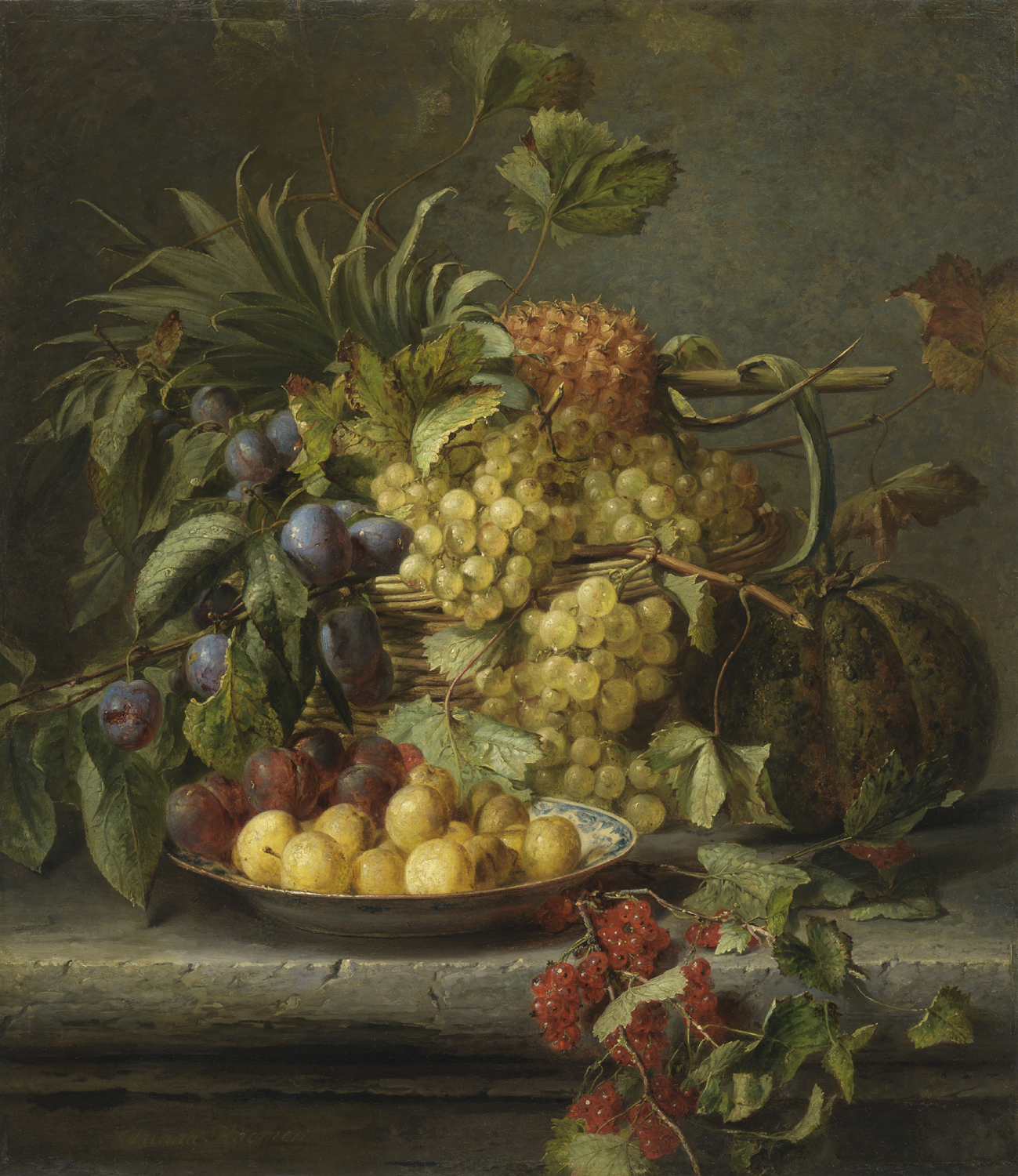 A still life with fruit 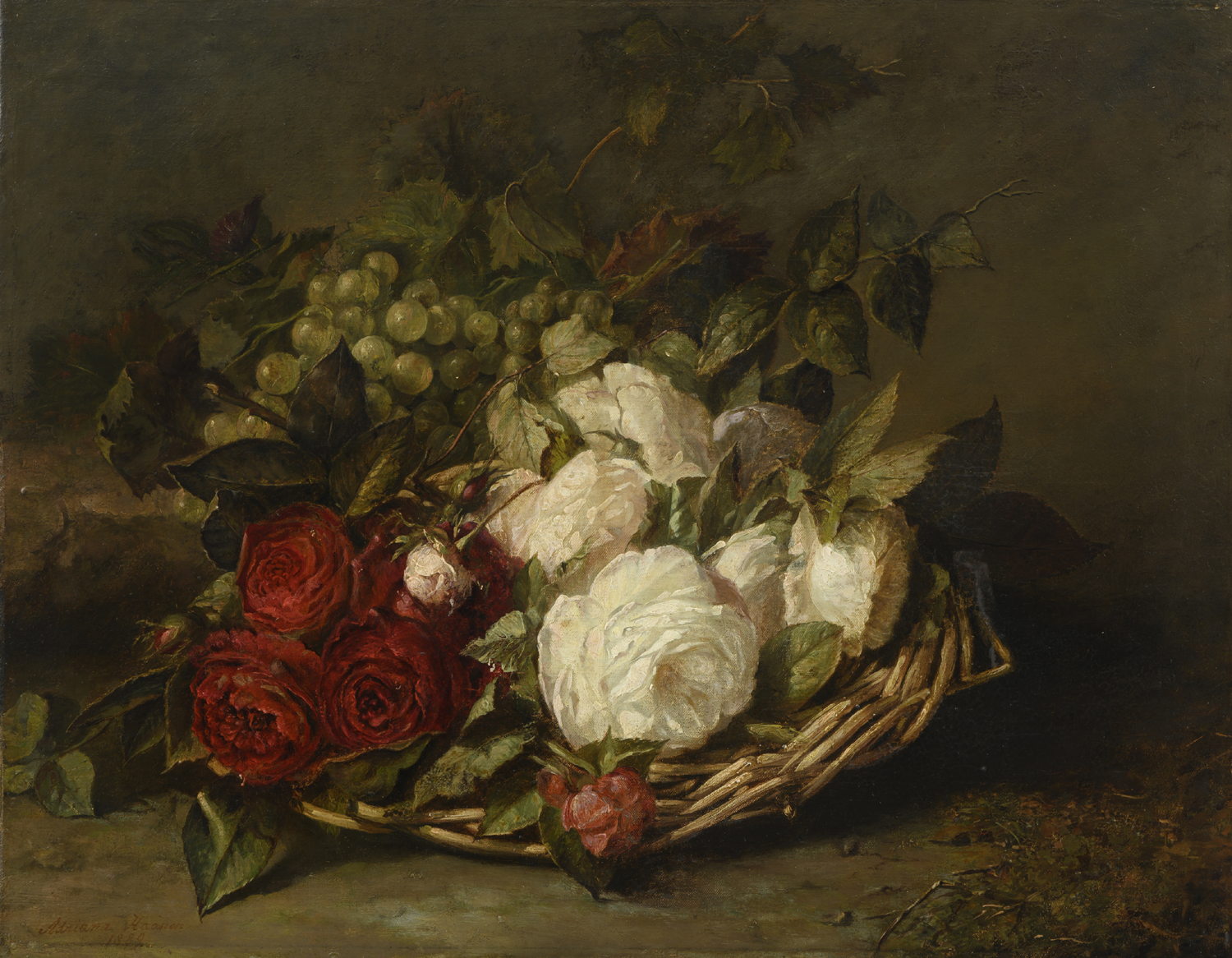 A still life with white and red roses and grapes