Starting his artistic education during a very fruitful period for French painting, the last quarter of the nineteenth century, Henri Lebasque truly developed a clear (post)-impressionistic style and palette. He first studied under Léon Bonnat in Paris and in the late 1880’s met Camille Pissarro and Auguste Renoir, who without doubt influenced his oeuvre. During his life Lebasque would participate in several modern salons such as the Salon des Indépendants and along with his friend Henri Matisse he founded the Salon d’Automne in 1903. Through his active role in the artistic world, Lebasque became acquainted with several of his famous contemporaries as André Derain, Raoul Dufy, Louis Valtat and Henri Manguin.

The painting ‘Nu sur la plage’ shows Lebasque’s fascination for the female nude and his subtle yet colourful approach of the subject: “Henri Lebasque invites the viewer into this intimate and private world, laden with the power of suggestion and seduction… These women softened and gently rounded as the bodies of Renoir’s nudes, have a substance and naturalism which make them immediately pleasing. They are presented in a manner to suggest the artist’s ease with his model and her naturalness with him.” (Lisa Banner & Peter Fairbanks, ‘Henri Lebasque 1865-1937’, San Francisco 1986, p. 74)

In 1924 Lebasque purchased la Villa “Beau Site” in Cannet along the Côte d’Azur, with Matisse and Pierre Bonnard as his neighbours, where he lived until his death. ‘Nu sur la plage’ dates from this time and was most likely painted there. During this period Lebasque concentrated on nudes and the celebration of the female body in general. This seducing beach scene shows the charm of the Midi around the first quarter of the twentieth century. An elegant lady covers herself with a beach towel and seeks shadow under the parasol. Even though the palette of the present painting is very bright, the atmosphere is rather intimate. Further down the beach one can see a nude couple in the sand and on the left, through the frills of the parasol, a nude bather is shown. The nude model however is showing her back to these figures and covering herself in a towel, excluding them from the scene and making the intimacy between the spectator and the nude even greater, as if she poses only for the eye of the spectator, only for us.

Paintings by Henri Lebasque in the collection of Kunsthandel Bies: 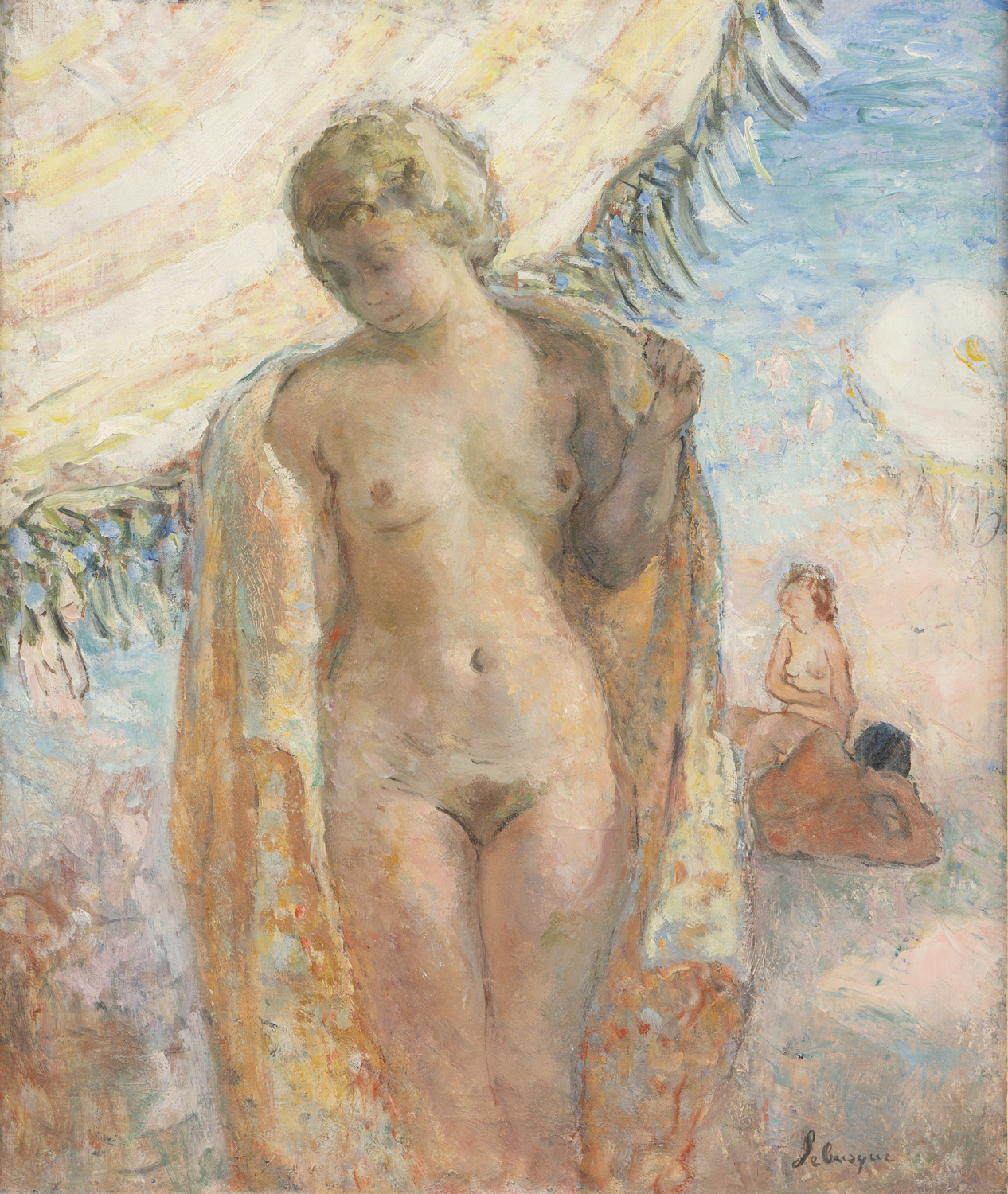