Hendrikus van de Sande Bakhuyzen is considered as one of the best painters of his time. According to the Kunstkronijk from 1847 he, together with Andreas Schelfhout and Bart van Hove, should be noted as ‘those who raised the art of the end of the previous [the 18th century] and the start of the present century [19th century] from its compressed state and gave it a free and independent direction’.

That may seem somewhat exaggerated but one mustn’t forget that Dutch painting had reached a low point at the end of the 17th century and after a century was nowhere near emerging from it. The 18th century had provided few artists of any significance, never mind any new artistic development. The country was plagued by the economic slump and the Vrije Academie (Free Academy for Art) that was established in 1779 was closed due to a lack of money. That is why it was refreshing when a new generation of painters appeared in the 19th century who valued quality, had sufficient talent to bring it to fruition and who were not afraid to follow their own ideas of what is beautiful and good.

Van de Sande Bakhuyzen had great admiration for the landscape painters from the 17th century, in particular work by Albert Cuyp and Paulus Potter. Although he painted other subjects, such as a few very worthy winter landscapes, he decided to apply himself to painting cattle. After two years of drawing lessons from J. Heijmans he had to continue alone with only the old masters as examples and nature as his guide. He did receive some painting lessons from Simon Andreas Krausz but the latter advised him to go his own way and only consult him if it was really necessary.

Thus Van de Sande Bakhuyzen followed his own path. He frequently worked in the vicinity of The Hague and in the wooded areas of Gelderland. He also travelled to Germany and Belgium. In some of his landscapes an un-Dutch, mountainous environment therefore forms the decor. The sketches he made in nature were later developed in his studio into oil paintings. Cattle began taking a more prominent place in his compositions from the 1820s. In these paintings cows were usually the main focus and the landscape and any shepherds were mere staffage.

Throughout his life Van de Sande Bakhuyzen maintained a fairly constant, high quality of work. That is also the reason that he was successful as a painter early on. He could count the Rijksmuseum in Amsterdam as one of his customers; they purchased one of his paintings in 1818. His customers also included the Teylers Museum in Haarlem and no one less than King Willem II of The Netherlands. Moreover, he was the first Dutch painter to receive commissions for work from America.

Paintings by Hendrik van de Sande Bakhuyzen in the collection of Kunsthandel Bies: 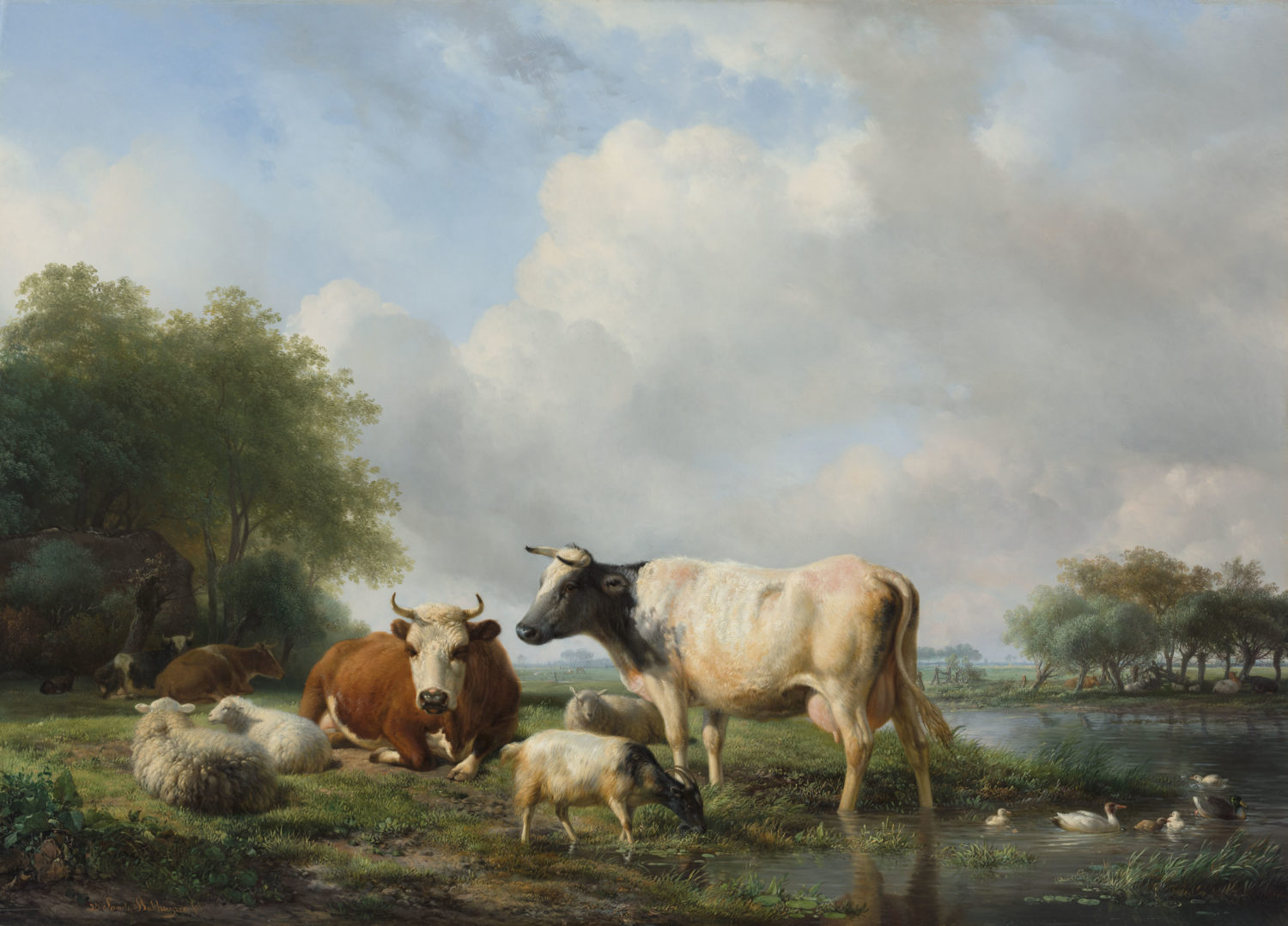 A landscape with cattle near a pond