George Hendrik Breitner is one of the most renowned impressionist painters of the Netherlands. He is especially well-known for his dynamic cityscapes of Amsterdam and for depicting life on the streets at the turn of the century. In addition, his numerous figure pieces and his military subjects with horses and cavalrymen are famous.

Breitner was born in Rotterdam. In 1876, he enrolled at the academy in The Hague. Later, he worked at Willem Maris’ studio. In this early period he was especially influenced by the painters of the Hague School. In 1882 Breitner met Vincent van Gogh and with him he travelled to Drenthe to practise drawing outdoors. Just as Van Gogh, Breitner was searching for his style in the beginning of his career. He was not satisfied with his own drawing abilities, which were often criticised. His drawing were considered ‘unfinished’. In fact, Breitner was artistically well ahead of his time.

Someone who did recognise Breitner’s talent early on was the acclaimed painter of sea subjects Hendrik Willem Mesdag. In April 1880, Mesdag received the assignment to create a large scale panorama of Scheveningen. Mesdag chose his wife Sientje Mesdag-van Houten, Bernardus Blommers, Theophile de Bock and Breitner to aid him with this project. Studies have shown that Breitner was one the most important contributors to the panorama. It was not Sientje Mesdag-van Houten, but Breitner who must have painted the village Scheveningen, as well as part of the sea, parts of the landscape, the pavilion Van Wied and other architectural objects. When the panorama was finished, Mesdag bought several of Breitner’s works from him.

A striking element in Breitner’s later painting is the use of photography. Photography, and owning a photo camera, was quite special in those times. Using camera and brush he captured life in Amsterdam. He regularly used photos as preparation for a painting or watercolour and photography influenced his work as a painter. It allowed him to document the bare, sober reality and this is noticeable in his paintings. Additionally, the dynamics of the streets are found in his painting in a special way. Compositions with quickly moving and therefore blurring figures, or placement of large figures in the foreground, suggest a fleeting ‘photo moment’.

Not only the dynamics of the streets, but also those of the city had his interest. He closely followed the changes that came quickly in late 19th and early 20th century Amsterdam. Old buildings made way for new ones. The development of the city fascinated Breitner and inspired him to create several paintings, watercolours and photos of construction pits and demolition sites.

Paintings and watercolours by George Hendrik Breitner in the collection of Kunsthandel Bies: 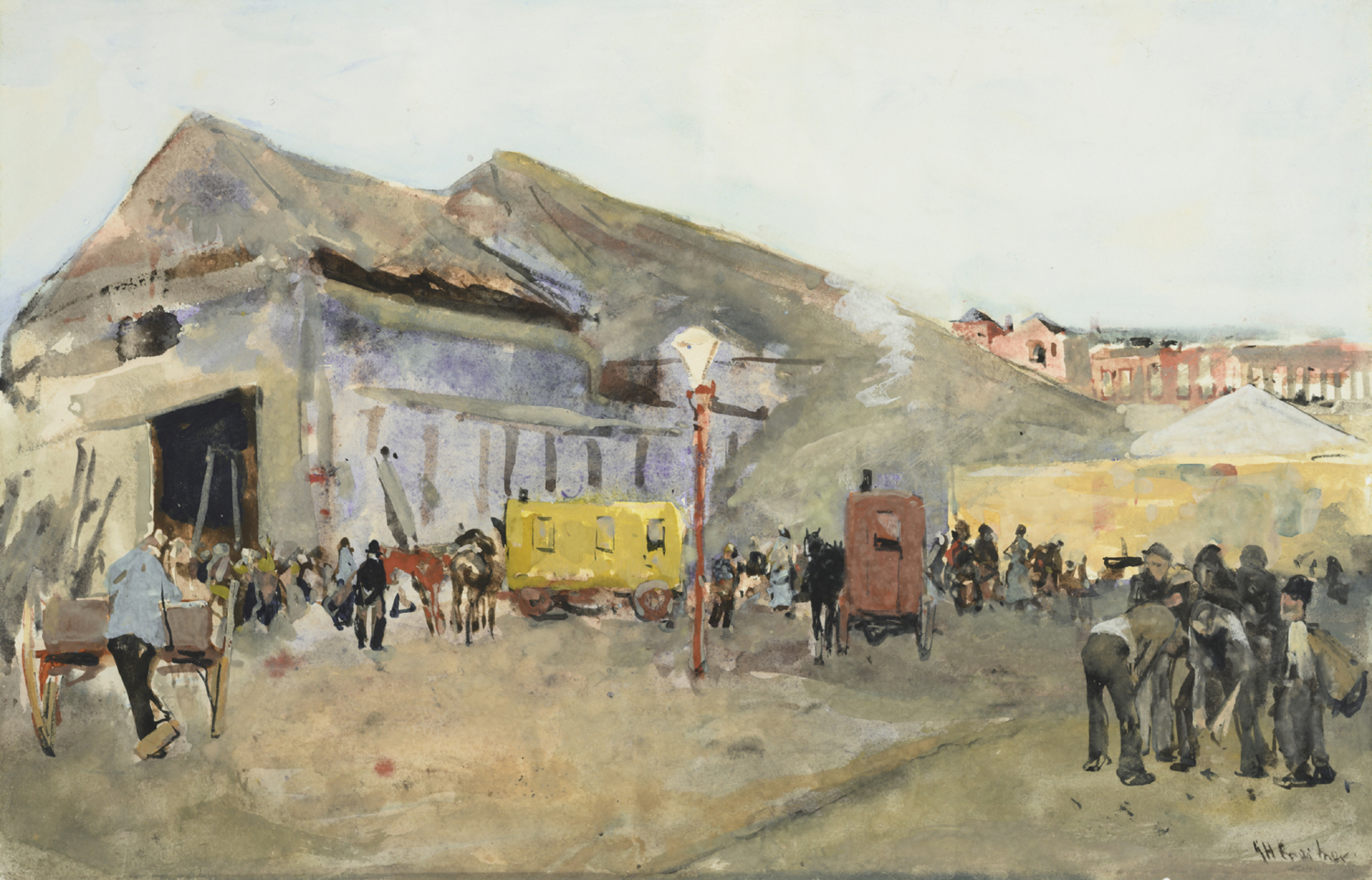 Demolition of the fair in Rotterdam