Adrianus Eversen had a strong preference for intimate town and village scenes. For him, it was about creating the right balance between architecture and figures. And unlike his contemporary and teacher Cornelis Springer (1817-1891), for whom prominent buildings and imposing churches where the subjects, Eversen often looked for smaller scale to find his inspiration. Churches are often present, but only in the background, so only the tower is visible. Because of this, it is often unknown in which town the painting was made.

Following his teacher, Eversen carefully built his compositions and worked out details with the greatest care. Striking in his paintings are the beautiful facades, the warm palette and the lively atmosphere. His figures are always busy. People are meeting each other in the streets, on their way to somewhere else, or transporting goods. Often there is an animal to be found, such as a dog or a horse. The strong contrast between light and shadow provides depth in his paintings. In his winter landscapes the snow contributes to the atmosphere and intimacy.

Eversen was born in Amsterdam en lived there for most of his life. He was probably also taught by Cornelis de Kruyff (1774-1828) and Hendrik Gerrit ten Cate (1803-1856); it is not known whether this was at the same time as Springer or not. In 1863 Eversen joined the artists’ society Arti et Amicitiae. He painted mostly in Amsterdam, but also in for example Harderwijk. And as there are also views of Edam, Haarlem, Ransdorp, Delft, Oudewater, Katwijk, Den Briel, Hattem, Breda, Utrecht, Woerden, Amersfoort, Antwerpen and Brugge by Eversen, it can be assumed that he worked in those places as well. He eventually moved to Rotterdam, in 1889.

Adrianus Eversen sold his paintings in the Netherlands and abroad, for example in Belgium, England and the United States. He exhibited in cities as Bremen, Berlin, Dresden and Vienna and at home he participated in Exhibitions of Living Masters. A special fact is that amongst his customers was the well-known art collector John Sheepshanks (1787-1863). Together with the rest of Sheepshanks’ collection, Eversen’s paintings have been donated to the Victoria & Albert Museum in London.

Paintings by Adrianus Eversen in the collection of Kunsthandel Bies: 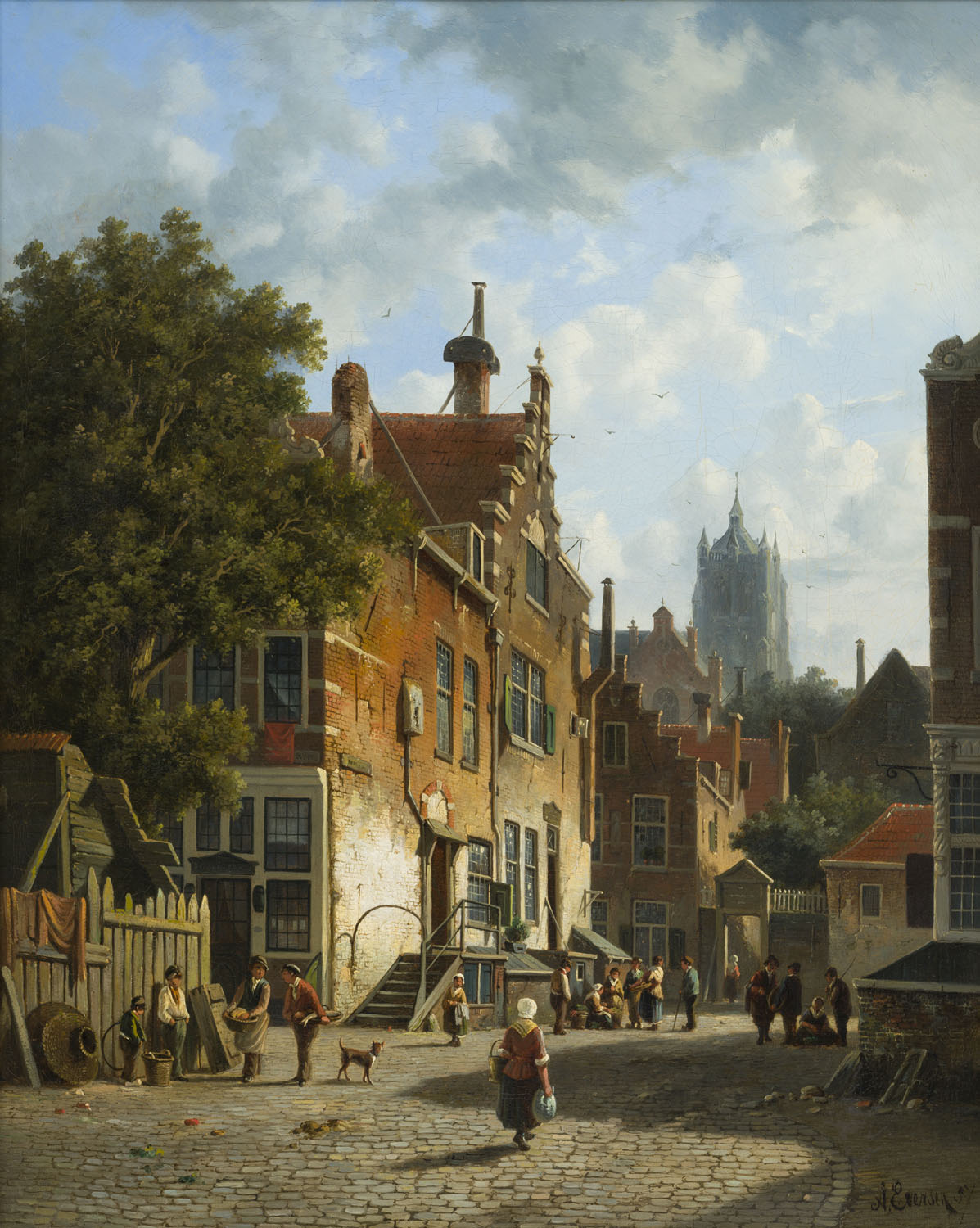 Sunny Dutch town with many figures, a church beyond 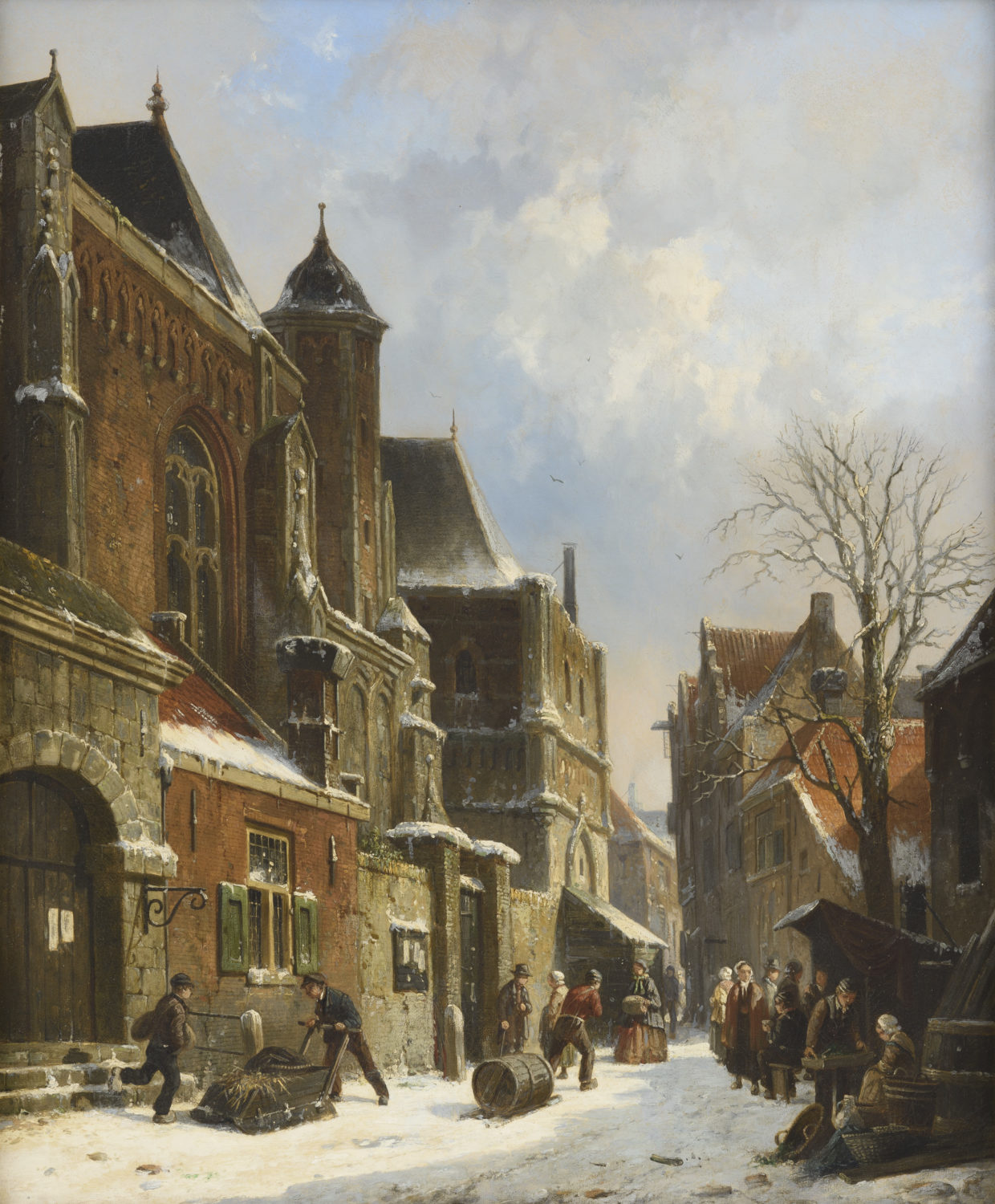 A Dutch town in winter 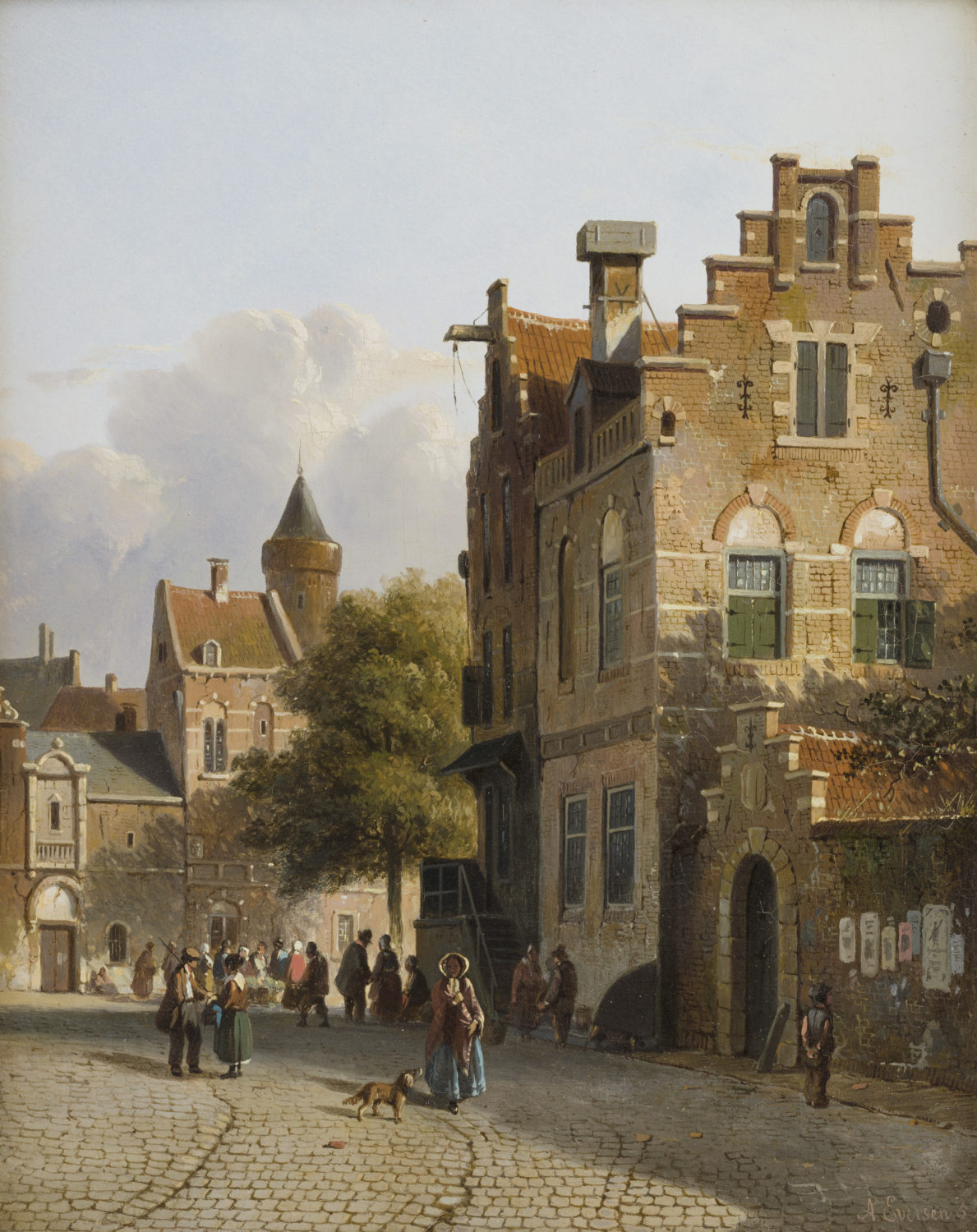 A Dutch town in summer with figures 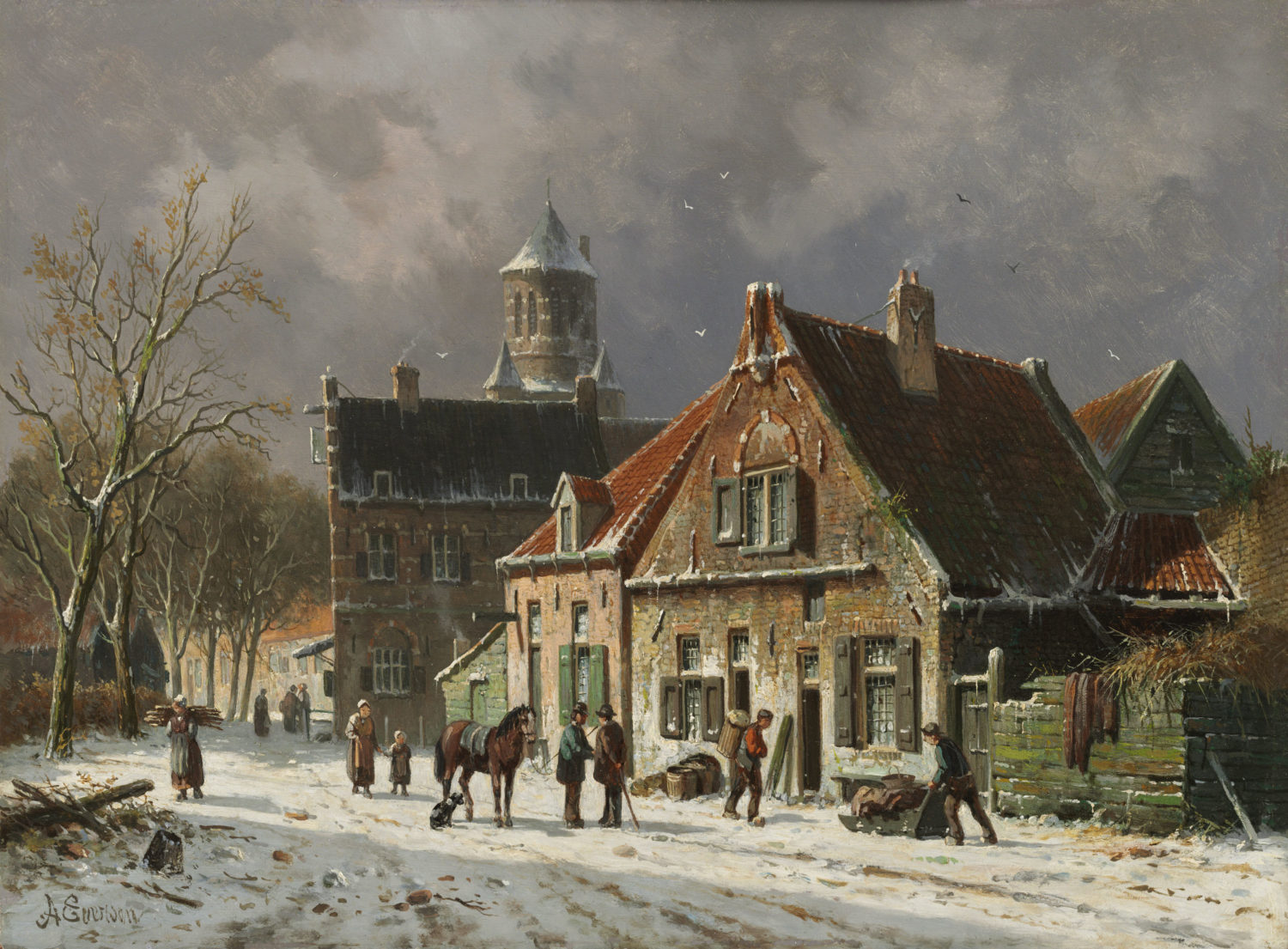 A town view in winter with figures and a horse 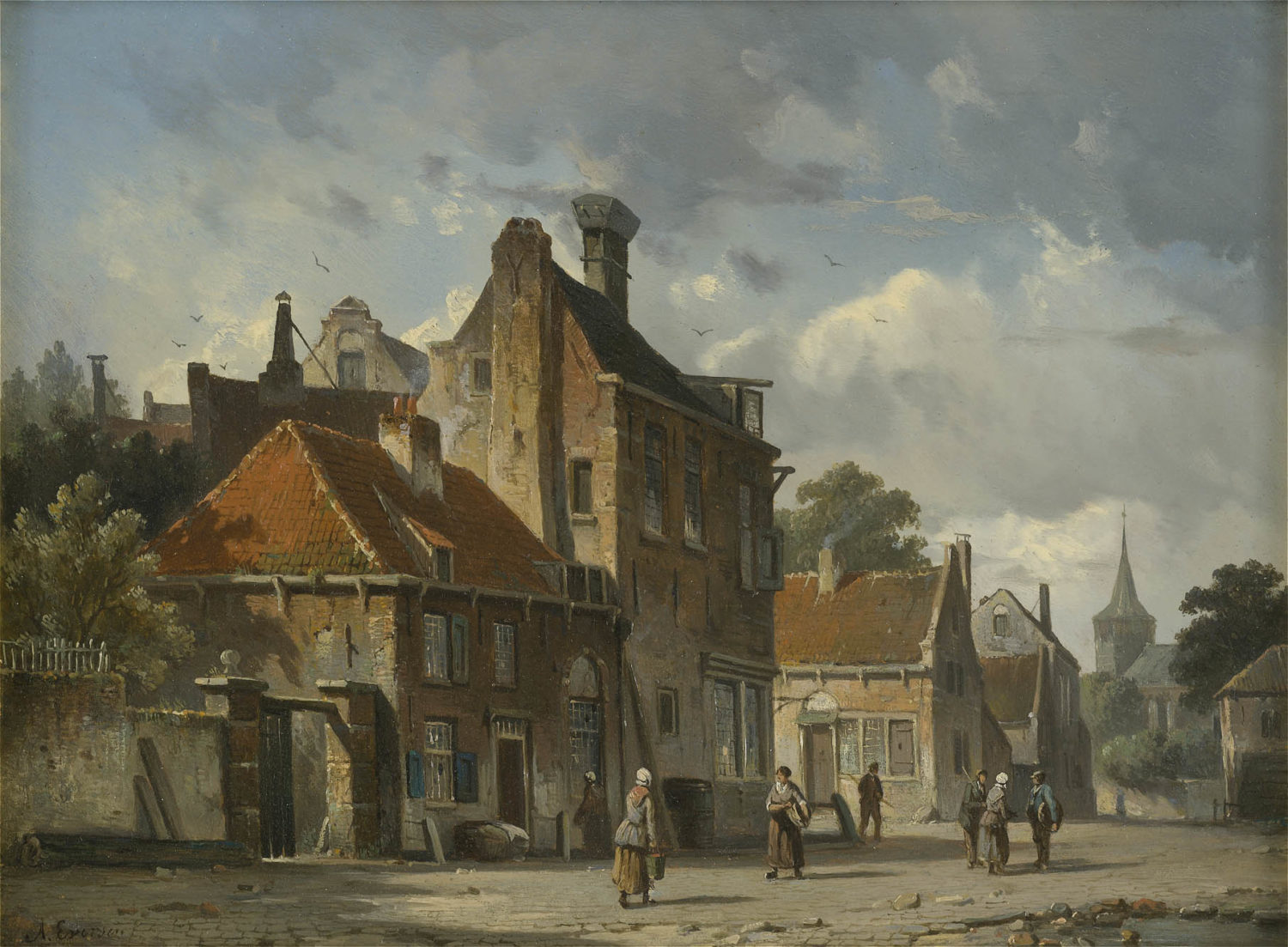 A town view with figures