Abraham Teerlink, sometimes called Abram or Alexander, was a Dutch painter and draughtsman, who lived in Rome (Italy) most of his life. He was born in 1776 in Dordrecht. He received his first drawing lessons from Machiel Versteeg and Jan Kelderman. Later on he was taught by Arie Lamme, grandfather of Ary Scheffer. In 1805 he became a member of the well-known drawing society Pictura. Soon his excellent drawing skills were noted, particularly in landscape painting. In 1807 Teerlink received the first ever Dutch Prix de Rome for one of his landscapes with cattle.

The Prix de Rome was originally a famous French scholarship for young arts and architects. With a royal scholarship, price winners could travel to Rome to study the ancient art and old master pieces. But the price was also established in the Kingdom of Holland by Louis Bonaparte (brother of French emperor Napoleon). During the years 1807–1810 prize winners were sent first to Paris and onwards to Rome for study.

In Paris, Teerlink studied under famous artist Jacques-Louis-David. David ordered him to study and copy the old master paintings at the great museums like the Louvre. This was standard practice. At the French Academy he studied the human body using live models. After approximately one year in Paris, Teerlink arrived in Rome in ca.1808-1810 and loved it so much that he never left. He married an Italian woman from Siena who was also an artist, Anna Muschi (1800-1885). But that could not have been the main reason for him to stay because the marriage was not until but not until 1836 (when the artist was already fifty years old).

Some sources hint that Teerlink didn’t want to go home because of the changing political climate. In 1810 French Emperor Napoleon annexed the Kingdom of Holland, because he grew tired of his brother’s willfulness. (Louis Bonaparte appeared to be, unexpectedly, hugely popular in Holland and way more independent then Emperor Napoleon had intended). In 1815 the regime of Napoleon came to an end and the Kingdom of The Netherlands was founded in 1815. But even then Teerlink still preferred to stay in Rome, were he found plenty of work to earn himself a descent living.

Once in Rome, Teerlink painted Italian landscapes, a sub-genre which was already quite established in The Netherlands. Since the 16th and 17th century Dutch artists were inspired by the Italian landscape and in particular, by the golden Italian sunlight. Although some landscape artists hadn’t even been to Italy, but painted the untypical (un-Dutch) but highly appreciated Italian light anyway. Teerlink didn’t just incorporate the Italian light in his paintings, but chose to paint distinctive topographical places. For example the cascades near Tivoli, Marmore, Terni and lake Nemi.

Although Teerlink never visited his home country again (that we know of) he still sent artworks to exhibitions in The Netherlands. In 1819 he sent three paintings to the exhibition in Dordrecht, one of which was a winter scene. His works were highly praised and Teerlink became quite famous in The Netherlands as well. In 1836 Teerlink was appointed Knight in the Order of the Netherlands Lion.

At this moment, the Rijksmuseum is showing two monumental pieces by the artist, depicting The cascades at Tivoli, with a storm approaching (1824). It is suggested that it shows the artist himself, riding a white horse and a guide or servant holding his sketches.

Paintings and watercolours by Abraham Teerlink in the collection of Kunsthandel Bies: 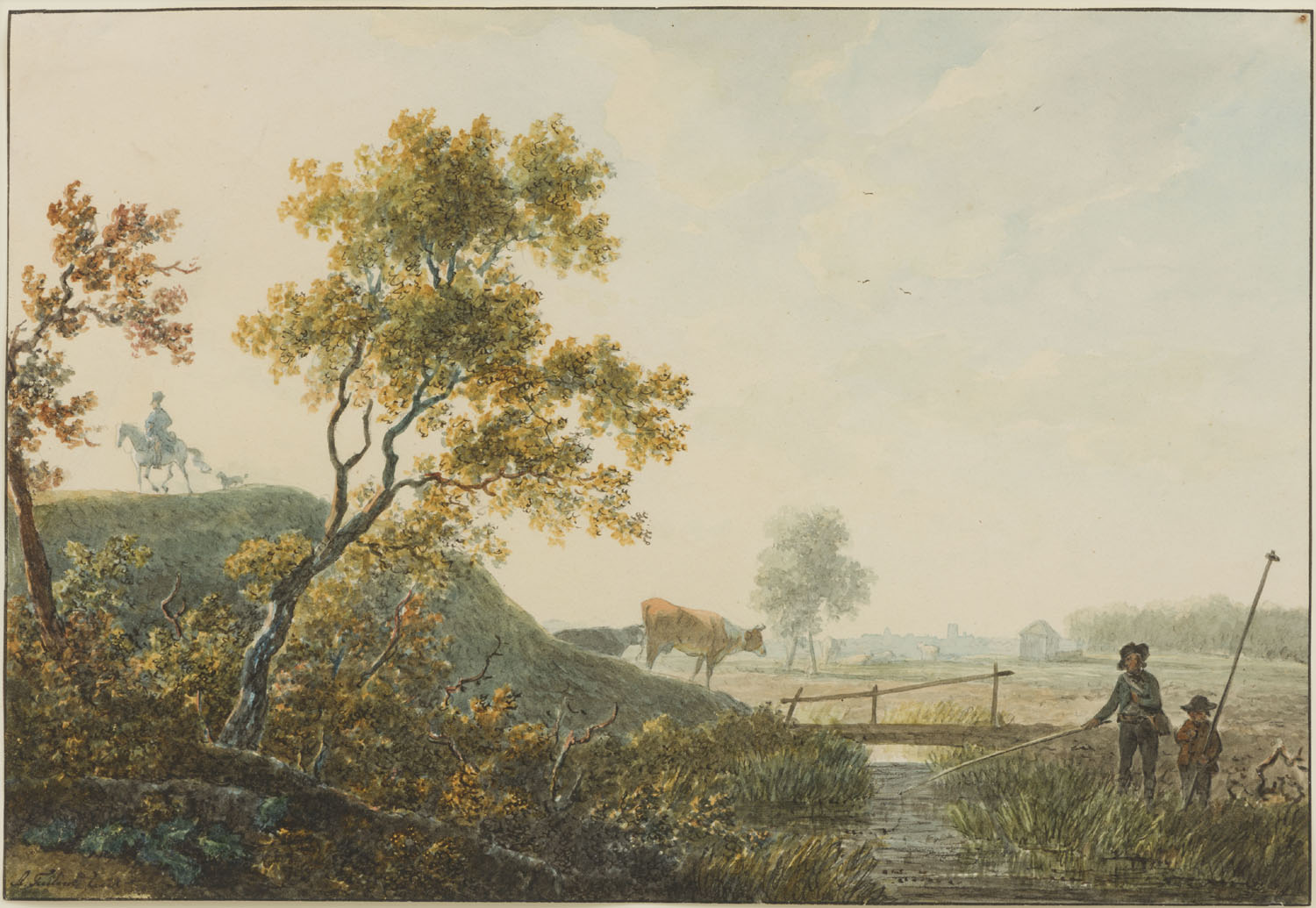 A landscape with fishermen by a river